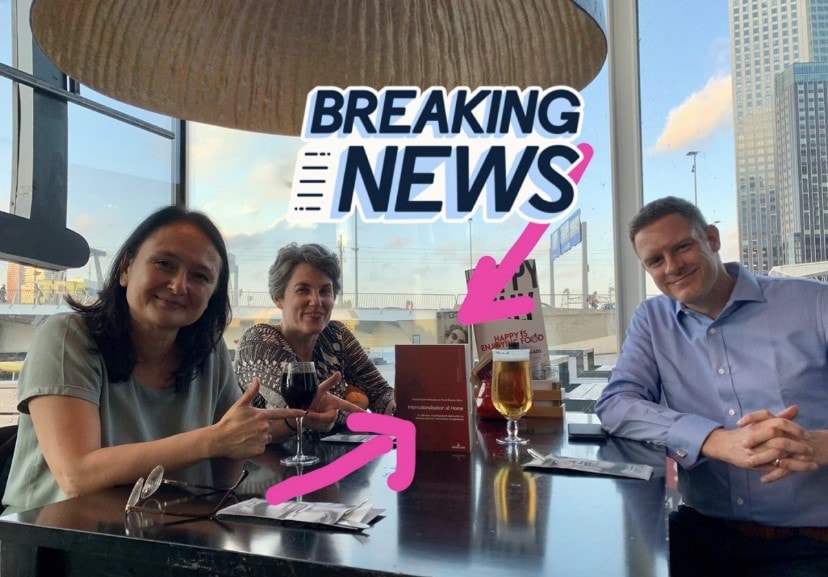 Students heading out into a life in business can be lost in a world of clashing cultures. Even those from blended families or second generation immigrant families, or who have done the 21st-century Grand Tour taking in Nepal and Thailand and Interrailing through Europe, can live, without realising it, in a monocultural bubble. Business schools try to solve this problem by sending students on placements abroad, to China, the United States, etc – expensive, especially from students from less advantaged families, but valuable.

But a four-year study of two business streams in Rotterdam University found that this stratagem can fail, unless it is enriched by work on intercultural skills. Cheryl Gerretsen, Jessica Shinnick and Christophe Van Puymbroeck, who made this study, are hoofddocenten, or in English, leading lecturers, in Rotterdam Business School, part of Rotterdam University of Applied Science. Their specialties are (Gerretsen) Master of Law, and Master of Arts in Indonesian linguistics; (Shinnick) Master of Social Work, and (Van Puymbroeck) Master of Art in Computational Linguistics, Master of Science in Business Economics, and executive MBA.

The university’s Trade Management for Asia programme leading to a Bachelor of Business Administration degree has two streams, one taught in Dutch, the other in English. There is a lot of cultural diversity in both streams, Van Puymbroeck explains. Around 40% of students in the Dutch stream come from a Chinese family background but grew up in the Netherlands; another 60% have various cultural backgrounds (Indonesian, Turkish, Morocan, Surinamese, etc). In the English stream there are a lot of students from Eastern Europe, as well as Dutch people studying through English.

Twenty-five years ago the university started to send students in this course to Asia for a year. At the time, the course included a study career coaching (SCC) programme, and separately offered a course of intercultural communication in the first block of the first year. “The assumption was that they were going to be really interculturally competent,” says Gerretsen. “That was true for many, but there were also students who had hardly progressed. Some even regressed, returning from Asia saying things like ‘Aww, I never want to work with Asians again’, saying Asians were ‘so unreliable’, things like that. There were people who just had a bad experience, because it can be very hard to spend a year away from your parents in such a remote culture.”

Gerretsen, Shinnick and Van Puymbroeck’s study of the effect of specific work on intercultural competence offered students a programme throughout both the Dutch- and English-language streams of the degree, integrating Intercultural Business Improvement’s Intercultural Readiness Check (IRC) into the SCC programme. The IRC is a complex eight-page questionnaire with multiple questions on cultural and attitudinal subjects. The revelations the answers provide of the respondent’s cultural competences, and the follow-up exercises used to hone those competences, make it a powerful tool for self-knowledge and change.

As a measure they used a previous study of students whose intercultural skills had been assessed in their third year, and again in their fourth year, but who had not had the advantage of using the IRC.

“We decided to weave more intercultural competence development into the programme, because we wanted to make sure our graduates were more interculturally competent,” says Gerretsen. “So we inserted elements of intercultural competence and dealing with diversity into the existing SCC programme. In this SCC programme, every year the students would have eight meetings in small groups, with topics around competence development – making career choices, things like that – and we substituted the topics of two meetings per year with cultural topics.

“The very first meeting around culture, in the first block of four in the first year, in the seventh week, they took the IRC test for the first time, then wrote an assignment on what they thought of the outcomes, and what their intercultural experience was thus far; what they said the outcomes of the IRC said about themselves; did they recognise the outcomes or not.

“Another topic was dealing with the typical exclusion mechanisms you have in multicultural group work – of course our students always had to work in multicultural groups, because that’s the nature of our student population.” Exclusion mechanisms are very likely to occur when you put people of different cultural backgrounds together. They can seriously interfere with the quality of group work, driving people into cliques, excluding people and lessening the group’s effectiveness in its work.

These mechanisms include stereotyping and stereotype threats – for example, fear driving you into living up to national or racial stereotype that other people might have of you. “These are processes that happen based on implicit bias,” says Gerretsen. “People are not aware that they treat people differently, mostly, and also it’s mostly well-intentioned, but the effect can be really powerful.” Tokenism is a hidden danger in multicultural groups – people can unconsciously set up one person to represent their whole type, so that the one black person in the group is seen as representing all of the good and bad stereotypes that you have of black people.

“All of these mechanisms can negatively impact the quality of the group work. So, we had students first study these mechanisms and then exchange experiences of them.” The students were taught to spot assumptions based on language command: for instance, if you’re very fluent in the language being used, you’re automatically seen as more intelligent just because you’re eloquent, whereas students that are quiet can be seen as being less intelligent or less well prepared.

They learned to spot and neutralise microaggressions – “those little remarks that people sometimes make – jokes, usually very well intended, no harm meant, but still, if you are a member of a minority group it becomes really annoying. An example is when people compliment others who have a certain appearance with ‘Oh, your Dutch is so good!’ It’s meant as something nice, but if you’re in a minority group and you hear this every two weeks it becomes really annoying, because it means they’re not seeing me as one of them, they see a foreigner.”

In effect, the students who had taken and repeated the IRC and worked on its findings about them, who had consciously learned about how intercultural groups can form into cliques and exclude others, were far more sophisticated and practised in their intercultural negotiations. “And the students who went to Asia and who had taken the programme progressed in that one year, whereas students that had not taken the intercultural competence programme, there was no significant difference in their scores on the IRC when they came back compared to before they went to Asia.”

Reflection was an important part both throughout the intercultural competence programme, and in the year that followed. “Students had to reflect on their own behaviour and things that happen in their personal life and also in their school life. Being aware of your own stereotypes, for example, is very important if you want to progress,” says Van Puymbroeck.

In their final assessment, students had to produce a written portfolio. “One of the assignments in that portfolio was to explain the development that the IRC gave them, comparing their scores in year 1, year 3 and year 4,” says Gerretsen. “One of the questions they had to address was specifically what they thought of the IRC instrument. Many students reported back to us that they felt the IRC had helped them, because it gave such concrete feedback.

“The most interesting thing is that very clearly many students had not agreed with their score in the first year – they thought that scores were too low. Only after having returned from Asia and having lived the experience of spending a year abroad in such a remote culture, they came to the conclusion that they’d overestimated their own abilities in years 1 and 3.

“Out of 21 students whose final reports we analysed in detail, some 18 wrote about how they overestimated their own ability in year 1. We asked them to analyse why their style developed the way it did, and the IRC really did help them to give vocabulary to the stage of their developments.”

The university has now reworked its programme and offers an International Business degree, with an intercultural competence track integrating the most effective elements of Gerretsen, Shinnick and Van Puymbroeck’s study.

Cheryl, Christophe and Jessica also published their work in a recent book. Here is the full reference to their work: